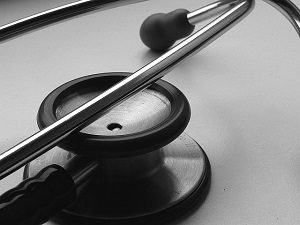 A 43 year-old man presents to his physician with a complaint of progressive difficulty in swallowing solid food. He has a 10-year history of heartburn which increases with spicy food and relieves by antacids. He does not smoke or drink alcohol. His weight is the same since last visit six months ago. He is scheduled for endoscopy next week.

What is the most likely initial diagnosis for this patient?

This patient has progressive dysphagia to solids. He also has a history of heartburn for 10 years. Heartburn that increases with spicy food and relieves by anti-acids in suggestive of GERD. The first complication of GERD is peptic esophageal stricture which is caused by acid reflux from the stomach into the lower part of esophagus. Cancer esophagus is excluded as the patient didn’t lose any weight and he doesn’t have the precipitating factors such as smoking and alcohol intake. Achalasia is characterized by dysphagia to both liquids and solids.

The correct answer is B